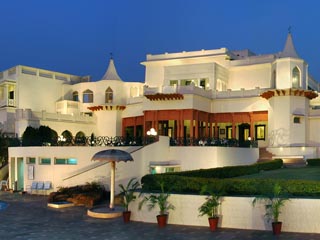 Bhopal was founded in the 11th century by Raja Bhoja of the Parmara dynasty. He constructed two beautiful lakes and established Bhojapal on and around these lakes and seven hills. It served as capital during the reign of this dynasty but as their fortunes dwindled and under the onslaught of repeated plundering, the city slipped into obscurity. Little or nothing remains to show of that period. In 1707, Dost Mohammed, an Afghan soldier of fortune, laid out a city at the same site following the death of the Mughal Emperor Aurangzeb. A great deal of the 18th century architecture and the Islamic influence of the time shapes the city of Bhopal with its crowded markets, narrow alleys, beautiful palaces, old haveli residences and fine mosques; and even its famed cuisine. Alongside this old city is the neatly laid new one with broad avenues, modern buildings and well planned residential colonies. For over a century from the early 19th century, a succession of powerful "Begums" ruled over Bhopal and introduced waterworks, railways and the postal system, and there is a great deal still to show for the heyday of this city.

The undulating seven hills, the large lakes and the profusion of parks lend a relenting charm to urban Bhopal. Two lakes, the Upper and Lower Lakes, serve as a neat division between the old and new urban sections of the city. The new is evenly sprawled over the seven hills of Bhopal, while the old is crowded and teeming with activity with houses, shops and markets jostling for space through narrow streets and alleyways. Bhopal enjoys a fairly temperate climate through the year except for a couple of months of summer preceding the monsoons when temperatures can be rather harsh.

This heritage hotel has the best to offer in terms of traditional hospitality and refined taste while it goes beyond the mere need for modern comfort and provides a certain atmosphere of opulence. No of rooms Noor-Us-Sabah Palace has 60 centrally air-conditioned rooms and suites.