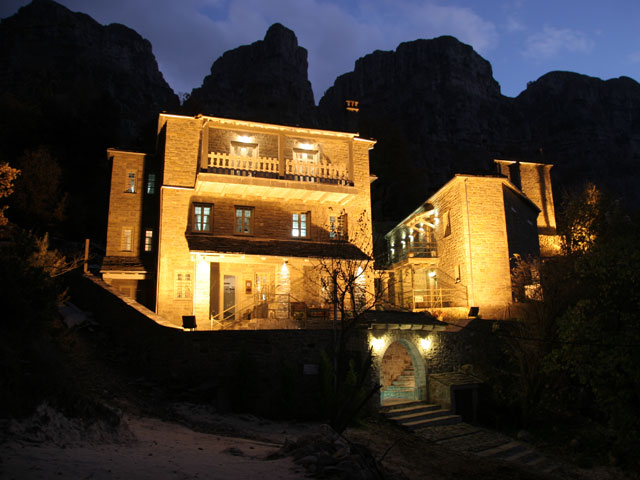 Mikro Papigo … 1700 'Hotel & Spa' consists of 15 rooms and suites and a uniquely designed Spa.While developing mild in space at different levels, it rightfully claims the title of the most beautiful "balcony" in the Vikos Gorge and in the settlements of small and big Papigo

The composition of volumes is perfectly suited and tied to the landscape and consists of five one-storey or two-storey buildings, to avoid monotony and to create a sense of a private small settlement. Impressive and unique both in its external form and the internal spaces which are exclusively signed by the most famous designers, Philippe Starck, Castiglioni, Citterio, Urquiola, Le Corbusier, Zaha Hadid, the Moooi, B & B Italia, Bisazza.

Evolving the landscape – beyond natural – to a cosmopolitan destination for exclusive vacation ,still literally surrounded by nature, as from the hotel begins the path to the alpine lake Drakolimni and its shelter, the sources of Voidomatis and the heart of the forest of the National Park of Vikos- Aoou.

A destination famous for its architecture and ecological beauty ,an oasis of tranquility and good taste.

A home away from home.

Note: In the traditional village vehicles are not allowed

PAPIGO : THE MOST ORIGINAL TRADITIONAL MOUNTAIN VILLAGE IN GREECE

Mikro Papigo, alongside BigPapigo are the two settlements of Papigo. It is one of the most beautiful and most famous villages of Zagorochoria situated northeast of Ioannina 59 km away. the city.

Built at an altitude of 980 meters is in a particularly imposing landscape below Mount Timfi. The traditional local architecture, lush vegetation and the beauty and wildness of the landscape at the same time make it an ideal destination for the most wandering visitors.

At the end of the Byzantine era, Papigo was the capital of West Zagori while as  ¨ PAPIGO" stated Timfi mountain range that lies above it.

A few meters before reaching the Mikro Papigo are the fonts, the natural pool "Rogovo"  . The stream of Rogovo by water erosion formed round depressions that resemble small lakes, which the locals call "ovires ¨. During the summer months you can swim and relax in one of the fonts.

Important personalities of literature, science and arts originate from Papigo. The scholar, director of the Perkins Institute for the Blind in Boston and benefactor of Papigo Michael Anagnostopoulos (1837 – 1906), Georgios Anagnostopoulos (1867 – 1952) professor of linguistics at the University of Athens, Zacharias Sardelis (1830 – 1913) scholar, journalist and publisher  ¨IRIS" newspaper in Bucharest and Christodoulos Tsiotidis (1838 – 1894), Consul of Greece in Bucharest were some of the people who originate from Papigo.

At the entrance of the village, next to the Church of the Archangels, is the old school, a work of Michael Anagnostopoulos hosted today by WWF Information Centre which will tell you about the fauna and flora of the region.

Mikro Papigo, under the supervision of five majestic towers of Astraka which the highest reaches 1788 meters and the mythical Drakolimni will enchant you with its rich natural landscape that blends in with the architecture of Epirus.

As traditional preserved settlement declared Mikro Papigo attracts many visitors every year, without affect its picturesque and unique way of maintaining the territorial and cultural organization of the local community.

Mikro Papigo … 1700 is the perfect station to start your trekking tours and explorations. From there you can walk to the shelter of Astraka and Drakolimni and other activities like hiking, climbing and hiking.

The specificity of  Mikro Papigo combining rich cultural heritage, tradition exemplary hospitality, variety of activities, the incomparable beauty landscape and magnificent view make the  visitors return again and again to experience the magic of the area.

Includes the valley of Valia – Calda (Vlach is word and means "Warm Valley." Called so because it shows significant temperature fluctuations during the 24 hours, with very high temperatures during the day with no clouds and very low during the night) of Arkoudorema, mountains and Lygkos Mavrovouni (Flega 2.159m) to the tops of the mountain Egg (Yps.2.177m).

The geological setting of the park consists of rocks of the flysch group with enough serpentine, gabbro, limestone and dolomite with predominant occurrence of serpentine. The lands of the park were formed by the weathering of peridotite and serpentine. Is clay, clay texture, acid reaction and rich in magnesium and iron and often contain toxic concentrations of chromium, nickel, manganese and aluminum.

The frozen "Warm Valley" got her name kat'effimismo, being one of the coldest and wet areas of Greece.

The climate is Mediterranean-mountain of the richest in Greece precipitation (1.500mm/etos) and snowfall. The summers are cool with several local rains. The cloud is high and frosts common from October to May while the snow covers the Park from 7 to 8 months a year.

The scenery is spectacular and besides the variety of morphological and vegetative features, further underlined by huge cliffs and rushing streams. The environment is very important for the living of a vast variety of species from the animal and plant kingdom.

Covered by dense forests Black – white pine and beech is not a refuge for many species of birds, among which are some rare prey (vulture-eagle) and large mammals (bear – wild goat-deer) that have disappeared from most areas Country. The entire area is perhaps the most important habitat in our country for the brown bear.

The Park of Pindos as general finding Greek and foreign experts, is characterized by unique biological, ecological and research interest. It combines the aesthetic landscape of great value, the habitat with a great diversity of flora and fauna, diverse geomorphological composition, sensory and uniqueness at national and European level.

With an initial investigation, counted 30 species of trees and shrubs with great interest, 120 species of herbaceous vegetation characterized by the appearance of the endemic species Centaurea vlachorum and 18 species of orchids.

Mikro Papigo … 1700 'Hotel & Spa' consists of 15 rooms and suites and a uniquely designed Spa.While developing mild in space at different levels, it rightfully claims the title of the most beautiful "balcony" in the Vikos Gorge and in the settlements of small and big Papigo

Nearby hotels to Mikro Papigo 1700 Hotel and Spa