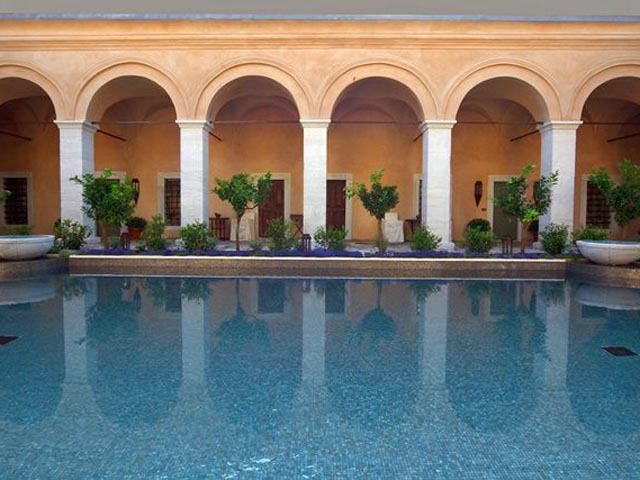 Imaret is an intimate luxurious hospitality property, located within the homonymous historical monument.

Built in 1817 right in the middle of the historical district of Kavala, in northern Greece, Imaret is an unexpected oasis of tranquillity and superior service.

The monument is a rare example in Europe, a masterpiece of late Ottoman architecture.

The variety of decoration, the quality of the delicate structures, the interaction between indoors and open spaces and the adaptability of the functional structures, create an original complex of high aesthetic and cultural value.

Imaret is a member of the exclusive Historic Hotels of Europe!

Originally built in 1817 by Mohamed Ali Pasha, the founder of the Egyptian dynasty, the Imaret consisted of a series of inter-related buildings, including schools, a Mosque, a Hamam, administrative offices and the Imaret itself (Dining Facility). It quickly became a recognized center of learning throughout the Balkans, during the last phase of the Ottoman Empire.

Mohamed Ali Pasha the founder of the Egyptian dynasty of Fouats, donated Imaret to Kavala, the city of his birth.

The complex is crowning the hillside of Panagia, the city’s old district, offering stunning views to the sea and the surrounding hills. The building is considered to be an architectural delight blending the orient and western influences of the époque.

The restoration works were in full compliance with the cultural heritage of the monument and the distinctive architectural details. The project was under the supervision of archeologists and architects from both the Greek and the Egyptian Ministries of Culture.

After almost a century of neglect, the monument has been fully restored to become the first hotel operating within a historical building in Greece.

Mehmet Ali was born in Kavala in 1769, in a rather impressive house on the town’s peninsula. His childhood years remain difficult to follow as there are limited sources of information and many theories have seen the light of day.

When Napoleon invaded Egypt, M. Ali joined the Ottoman army. He was soon promoted to high ranks due to his abilities and insatiable ambition. Henceforth his life belongs to Egypt.

The Mohamed Ali’s mansion, built between 1780-90 is among the distinctive monuments of the old town. It is a typical example of the so called ‘broad-fronted, two-floor traditional dwelling’ with a row or rooms leading to the main living area on the first floor and the amenities and a covered courtyard on the ground floor.

The Mohamed Ali’s mansion is one of the very few examples remaining in Greece that preserve the distinction between male and female quarters. Today totally restored houses the restaurant of Imaret Hotel.

More information for this hotel

Imaret is a new luxurious hospitality property located within the homonymous historical monument built in 1817 overlooking the city of Kavala in northern Greece.

It has regained its former glory without shedding the burden of history and back it is with people, for whom it was built, to offer yet again hospitality, beauty and knowledge.

Imaret will not be the only surprise!

The region is one of the richest in sites, but alas, the least known and explored.

Furthermore, projects conducted in recent years with the support of E.U structural funds have made many sites more easily accessible and visitor friendly and contributed to the building of new museums and the improvement of old ones.

Kavala itself is place with many sites, the old town and the museum to mention only two.

The Imaret Restaurant and the Bar are located in the most recent building of the monument dating to 1863, characterized by distinctive western architectural influences.

With its rich oil paintings collection, leather armchairs and original antique pieces, this privileged spot overlooking the Bay, creates the most inviting atmosphere to relax and unwind next to the fireplace.

Indulge yourself over an opulent selection of champagnes, malts and cognacs, accompanied by the hotels assorted flavours.

The Bar in the Mohamed Ali Gardens

The old mansion where Mohamed Ali the founder of modern th Egypt was born, houses a museum of civil life of the 18 century.

During summer time, the gardens of the house offer an exceptional scenic view of the sea, the city, and the surrounding hills for drinks and refreshments accompanied by classical music.

Remember the ritual of an afternoon tea with the large selection of Fortnum and Mason's teas, in Imaret's intimate tea room. Breakfast, coffee and tea are served in original Haviland-Limoges porcelain named after the Empress Eugenie, to remind the romance of an Egyptian ruler and the European Empress.

The Restaurant situated underneath a glass façade in the winter and the open sky in summer allows the interior to blend unexpectedly with the luminosity of the Mediterranean scenery and it is an ideal setting for an intimate dinner.

The fine seasonal dining is based on regional and european cuisine.

Most salads, vegetables, fruits and herbs used in the menu, originate from Imaret's own organic garden.

At the first sign of summer, Imaret offers the possibility of private dining in the gardens and the terraces.

A heaven of green, candle lights and the sounds of running water create a unique dining context.

Private dining should be arranged 1 day before.

Nearby hotels to Imaret Hospitality Monument