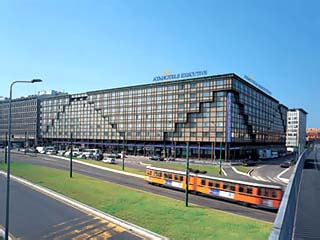 The Executive Hotel is a superior hotel, renewed in 2003 and directly connected to all the crucial points of commercial Milan. The Hotel is one of the biggest structures of the city, located in front of the Railway Station and close to the Expressway exit of Viale Certosa, easily accessible by all public transportation.

The Hotel's clients, thanks to the central position of the Hotel, next to Corso Como and close to Brera, heart of Milan's night life, have the possibility to have at hand everything a city like Milan offers: from the fashionable Restaurant to the trendy Resort, from the VIP's Discotheque to the prestigious Art Galleries, from the Theatres to the well-being and health temples.

The Executive Hotel is belongs to the world famous chain of Akahotels. Akahotels was established in 1967 in Salsomaggiore Terme (Pr) and in 1984 moved to Milan. In September 1991, Akahotels incorporated Interhotel SpA, another Hotel company belonging to the Ligresti group. On the 31st of May 2000, Akahotels concluded the merger process with the Lisgresti group company Interesidence, which managed eight superior first class Hotel establishments and residences in Milan and Rome.

If  also taken into account, the Ripamonti Città Congressi, a large Hotel structure in partnership with Akahotels situated in the south of Milan, the company will count up to 5,153 rooms. In particular, Akahotels remarkably strengthens its presence in the area of Milan, where it is able to offer as many as 1,189 Hotel Rooms and 1,496 flats in residences located in the most strategic areas.

All of Akahotels establishments, with the exception of the residences, offer ideal solutions for gatherings such as: Meetings, Conferences, Conventions and Seminars with a total number of more than 100 Meeting Places and up to 1,100 seats. Also, the conference section in the area of Milan places 60 Assembly Rooms at the conference operators disposal, with maximum capacity offered by the Conference Centers of the Akahotels Executive (800 seats) and the Akahotels Quark (1,100 seats).

To sum up, the company operates and manages a portfolio of 18 hotels and residences in Italy directly with the Akahotels brand. In the hotel industry, Akahotels asserts itself with a series of products addressing both the leisure market (holidays) and the medium to high level business market. As of 1995 the company has been committed to a wide restructuring programme, the aim of which is to supply its establishments with still more efficient services catering to their guests' needs.

By car, take the exit Viale F Testi from A4 Expressway 9km.

Double Rooms are divided in two categories: Superior and Deluxe all equipped with:

In addition, the Hotel's clients have at their disposal an 'ecological' floor, with Non-Smokers Rooms with parquet floors and beds with eiderdowns.

Il Giardino: In the Restaurant you can taste regional and international cuisine. It is open from 12:30 to 14:30 and from 19:30 to 22:30. The Restaurant has panoramic windows on the beautiful hotel's internal garden.

Nearby hotels to ATAHOTEL Executive