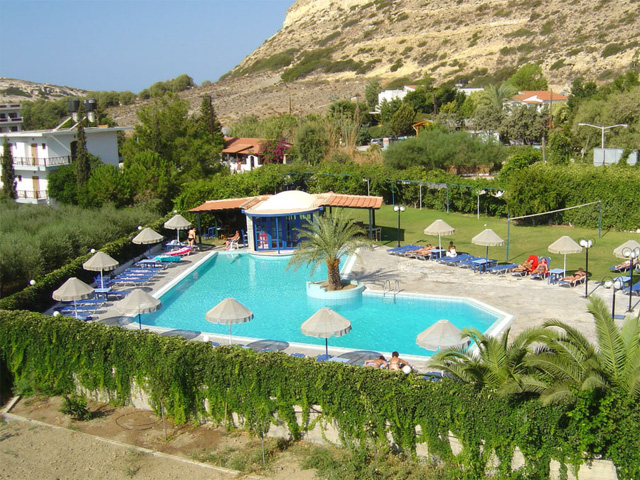 Our family has been involved with tourism in Matala for two generations.
Dating back to the end of the 70’s, our restaurant “The Waves” by the beach in the village of Matala, our ancestors, Stavros and Manolis Kyprakis, decided to expand into the hotel sector.
That’s how in 1987, “The Princess Europa Hotel” began her journey in time, when the main building had only 25 rooms. As the years passed by, the hotel grew bigger, with the addition of two more buildings, reaching in total, 60 rooms.
Ourselves, as the next generation, are guiding “The Princess Europa Hotel” into the new era with its family atmosphere, whilst retaining the hospitality, character and the friendly ambience that has made our hotel so popular, where guests depart more… as friends.

The busy beach of Matala, with its famous caves, has been awarded The Blue Flag, for it’s cleanliness and quality of water. Deck chairs and parasols are available for rent and a life guard is also present for your safety.
According to the Greek Mythology, Zeus came out of the sea here, transformed into a bull, carrying on his back, Princess Europa, the kidnapped daughter of the Phoenician King.
Matala, during the Minoan period, was the seaport of Faistos. During the Roman times, it was the port of Gortys the then capitol of Crete.
The main characteristic on the beach is of course the rock with its well known caves, which, according to legend, were carved during the Neolithic era and were used as graves by the early Christians.
A few centuries later, in the late 60s and 70s, they were inhabited by the hippies, with the unknown then but famous afterwards, Bob Dylan, Cat Stevens and Janis Joplin among them. The hippies were run off their favorite beach in the mid 70s.
These days the beach of Matala is an organized one with deck chairs and parasols for rent while the last years the Blue Flag is regularly waving – a decoration for its clean waters.

Half Board (Included in the price)

Nearby hotels to Princess Europa Hotel