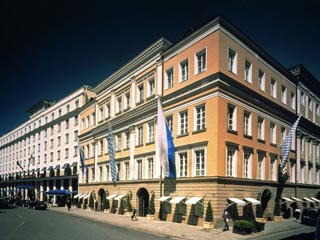 Open All Year... The Bayerischer Hof in Munich is one of the few large and famous International Hotels which has been run by its owners for more than 100 years. It is located in the Main Shopping Area of Munich.

The Bayerischer Hof in Munich is one of the few large and famous International Hotels which has been run by its owners for more than 100 years.

It is located in the Main Shopping Area of Munich.

Grand Hotels are Traditionally the Centre of the social scene of any City.

Welcome to the world of the Bayerischer Hof.

The Volkhardt family bought the Building, which is Centrally located at the Promenadeplatz in Munich, in 1897.

Today, almost 100 years later, the House is still successfully run by the fourth generation of the family.

The history of the Hotel began in 1840. Based upon the wish of Ludwig I of Bavaria, " Reichsrat " Josef Ritter von Maffei converted an old inn at the Promenadeplatz into a prestigious Hotel with the impressive number of 100 Rooms and two Function Halls. The standard of luxury was such that even from the start, Queen Elizabeth of Austria was one of the regulars at the new establishment. Falk Volkhardt took over the Hotel as the single owner in 1959 and with a plan of careful investment coupled with continuous modernization work turned the Hotel into an institution with a worldwide reputation.

The Palais Montgelas, located immediately next to the Bayerischer Hof, has belonged to the Hotel since 1969 when Falk Volkhardt purchased the Palais from the Bavarian state and converted the historic Rooms into a range of Hotel Suites, Conference and Meeting Rooms. The historic setting of the Palais, which is classified as a historical monument, has been preserved. Numerous antiques give it a unique historical atmosphere.

The magnificent Baroque Building got its name from Maximilian Josef Graf Montgelas, who was one of the most powerful ministers of Bavaria and a keen reformist. He bought the majestic estate in 1803 and extended it in 1810. The seat of the state ministry of the Royal House was later established here. Over the years the Palais Montgelas was a stage for many important events. It was here that Maximilian III was crowned Elector, where the secularization of Graf Montgelas was signed and the treaties concerning the soviet republic were signed. It is also where Nuntius Pacelli, the late Pope Pius XII, signed the Bavarian concordat.

Breakfast Room in the Roof Garden: Isn't it great when the day's highlights have already begun by breakfast time?

From the Dachgarten (roof garden) you'll enjoy a magnificent view out over the whole city. And the impressive panorama of the champagne breakfast buffet.

Its Mediter-ranean style represents itself not only in the interior, but also at the menu: Delicate, South Sea inspired cuisine cooked by the chef Steffen Mezger with your pick of treasures from the wine cellar - and in summer even on the garden terrace.

Could there be a better place for a business lunch or a dinner with good friends?

Palais Keller: It couldn't get more Bavarian than this: the sturdy vaults of the Palais Keller date from the year 1425.

Originally used as a salt store, today the Palais Keller accommodates guests from all over the world who come to enjoy Bavarian delicacies, beers from the keg and pretzels from their own court bakery.

Trader Vic's: What would life be without surprises?

In the heart of Bavaria, our Trader Vic's restaurant will envelop you in Polynesian exoticism.

Culinary delights from the Far East and legendary South Seas cocktails will put you in a relaxed holiday mood.

Blue Spa Bar & Lounge: There is one more thing that a sanctuary for the senses cannot do without: gourmet spa cuisine.

Refined creations from the spa chefs are served at the Blue Spa Bar & Lounge and in the Winter Garden with open fireplace.

Great store by light meals and fresh ingredients, which are harmoniously and carefully prepared.

In summer, you can enjoy the view over the whole city from the large terrace at the Blue Spa barbecue.

An exclusive treat, the likes of which you won't find anywhere else.

Falk's Bar: Few bars can claim to have been a legend before they opened.

But the new falk's Bar can. It is located in the famed Spiegelsaal (Mirror Hall) dating from 1839 - the only room in the Bayerischer Hof to have survived the Second World War unscathed.

The bar was named in memory of Falk Volkhardt.

Its blend of the traditional and the modern makes falk's Bar a favourite meeting place on Munich's nightlife scene.

Menehune Bar: Not counting their exotic names, the Menehune Bar and Trader Vic's Bar have much in common.

They're both located in the Trader Vic's Polynesian restaurant.

Whether a Mai Tai or a Tiki Puka Puka, these bars serve some of the best cocktails in town.

The Menehune Bar can be hired exclusively for special occasions such as celebrations or birthday parties.

Night Club Bar: Where can you watch live concerts by world-famous jazz greats without leaving your favourite seat at the bar?

In this Night Club. No wonder it's getting as famous as the artists who appear here.

Which is quite possibly why the Piano Bar enjoys such great popularity.

After all, good music and good drinks create the ideal conditions for good conversations. Famous pianists entertain you on Friday.

Blue Spa Bar & Lounge: The mosaical-tiled pool at the Blue Spa, in an enthralling setting on the roof of the Bayerischer Hof, could make many a guest thirsty just at the sight of its two hundred thousand litres of water.

It goes without saying that there is also a wide range of drinks, catering not only to fitness enthusiasts but also to those who prefer exceptional cocktails at the Blue Spa Bar & Lounge.

As well, the panoramic view will invite you to stay until sunset.

Trader Vic's Bar: Its name says it all: where else could this bar be but in the famous Trader Vic's restaurant?

It's not for nothing that the cocktails are world famous - and the exotic ambience is the perfect setting for an easygoing evening. If you so desire, even until 3 in the morning.

Today, business and leisure have their part at the Bayerischer Hof and with its 40 air-conditioned conference and banqueting facilities, it is Munich's largest venue in the city centre.

For conventions up to 660 persons in classroom style, 1620 persons in theatre style, 1400 for banquetings and 2500 for receptions, the newly refurbished ballroom-ensemble with 2 balconies, roof to slide open, adjoining rooms to enlarge the venue individually like the Atrium with glass dome, and with our professional business centre, will be your perfect venue in Munich's city centre for an unforgettable event.